The last ride of The Chris Pope Train Wreck

Musicians have stories. Much like every other profession, strange things happen.
I've been run out of a bar because i didn't play the type of country the regulars wanted to hear.

I've been shorted by bar owners, and had my gear stolen.

I even had a night where a woman requested a song... She didn't know any of the words and the way she described it, no one in the bar could understand a bit of it.( "It goes.....'something, something, something......NA NA NA' ".........That's exactly what she said. ) NO ONE was more surprised than me when I guessed the song she was talking about, and played it.....having never even considered playing it before.

We've all had nights where we leave shrugging our shoulders and shaking our heads.....
but one night in particular has bewildered me for years.....
I used to invite people to come out and jam with me…..For a few years, NO ONE ever did, So I would continue to invite anyone (who said they owned an instrument) to sit in. I don’t do that anymore.This one night, playing at the Rookery for my wife’s Birthday Party, EVERYBODY showed up.I had 3 electric guitar players,2 acoustic players plus me, (one of them didn’t even have a pickup in his acoustic and wanted to play REAL close to my vocal mic so it could get through the PA.) . I had a bass player, 2 more singers, NO Drums, and a guy who sat right up front with a harmonica……yes. One harmonica.I was much nicer back then, so things got out of hand quick. Also, at that time, I didn’t use a drum machine…..you can just imagine how bad it was.After every song, I would ask the harmonica guy to ‘sit this one out’. I told him over and over that I wasn’t used to a harmonica player and him playing SO CLOSE to me and SO LOUD that I was very distracted. Not only was he playing out of key, but LOUD.At one point, a person came up from the crowd and asked (beginning very politely, and increasing volume as he leaned toward the harmonica players ear.)…”Hey. Can your harmonica player play in the key of shut the f &% k up?!!?!?!” I laughed until I couldn’t breathe.It was complete chaos. Fortunately, this gob of ‘talent’ allowed me to decide the songs and the tempo for each song. It was so chaotic and thrown together that the door guy changed the name on the sign from “Chris Pope and Friends” to “The Chris Pope Train Wreck”.When it was over, I thanked everyone and started packing up, completely disgusted.Chris Wolfe (he now plays for EchoSpeed) was in the crowd that night and decided, based on that performance, to play lead guitar for me in a two piece we called "the Window Liquors".I got two business cards from women who wanted to book me for a private party. They both worked at Aveda and said they had the best time ever. To this day it blows my mind.
Posted by Chris Pope No comments:
Email ThisBlogThis!Share to TwitterShare to FacebookShare to Pinterest
Labels: article, humor

I wasn't expecting to go out on Friday, February 2, but fate pulled me to Friends On the Hill where I found Steven strumming his guitar and singing, as he was in a Lenny Kravitz hair fashion. I enjoyed the music as I found out that Steven was warming up the crowd for a bigger show to come, gaining word that Lance Rodriquez and Dustin were there as well.

To set the mood of what was to come, center stage was a bison skull, atopped with an inscent aglow and setting the scene with a vibrant fragrance. After much anticipation, Steven returned to the stage on guitar, bringing Lance to the drums, and Dustin on bass and lead vocals for most songs. Jokes broke out on stage and were woven between songs. The crowd jammed out to rock, hard rock, and metal songs performed through the night as LSD Crescent Moon Dog performed originals and additional cover songs, which are a rarity from this predominently original band.

This show was a treat for fans as a prequel and fundraiser for the new EP that LSD Crescent Moon Dogs will hopefully be releasing this upcoming March. Keep an eye out for these guys! 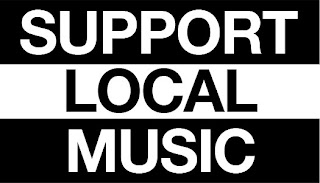 We all use Facebook as a way of advertising our shows, but we are missing out on MANY opportunities.

This site was built to help us in a variety of ways, and if we will collectively take advantage of it's benefits, we can see even more people supporting  live music!

Now before I go any further, let me point out, that at present, I have GROSSED approximately 4 dollars per month with this site. If I take my yearly domain fee out of that, I have made about 40 dollars for 2012. In June, I plan to take my wife to Outback for a plate of celebratory cheese fries with my earnings. Assuming of course, that the money keeps rolling in.

What if you could get other musicians to promote your show at the same time they promote their show? It would increase the visibilty of both ads and almost guarantee you all will have a bigger draw. A good example of this was seen recently!

This is where Lance Rodriguez has a show at Shenanigan's on the same day FailTrain is playing at Friends On The Hill. Lance will post something like.....

"Come to Shenaningan's tonight starting at 7 so that I can get you geared up for hearing FailTrain at Friends on the Hill starting at 10! Get drunk, get crunk, and experience the funk!- Lance "

It's been happening alot lately, and it should continue .......

When you list your show on the MidGaLive Music Schedule, you are promoting live music as a whole. You are drawing people to one place so that they can see the wide variety of music that is being performed. If you are on that schedule, they will, of course see your band as well.

By having your band profile on MidGaLive.com, you get the chance to promote yourself, and at the same time the Live Music Schedule will appear at the bottom of the page.You can post the article I have written for your band, as your advertisement. At the bottom of the screen, the Live Music Schedule shows all of the activity going on. Nothing attracts a crowd, like a crowd.

If you promote ALL live music, you promote the entire scene....This brings more people out to support it, which opens up more opportunities to play.

By using the color codes people will find it easier to seek out the type of music they are interested in....Which means you are making it easier for potential fans to find you.

You can encourage venues to use the MidGaLive Music Schedule to promote shows as well. This gives them a chance to read about all the bands in the area, and possibly open doors for you in playing new and different clubs, which opens the doors to new and different fans. If they can see what is working for another venue, and maybe they'll try that as well.

Personally, the notion that MidGaLive.com is somehow competition is funny to me. There is simply no comparison. I think the Eleventh Hour does show support for the music scene, but it supports many other things also. They have done well, but they can't focus specifically on every single act while simultaneously selling advertisements for every restaurant, art studio, and massage parlor in Middle Ga.. We coexist and I believe both the Eleventh Hour and MidGaLive.com have a purpose, and we serve it well.

Use every resource you can find to promote yourself. The Eleventh Hour is a  great resource too; and I wouldn't discourage anyone from using it.

Let's work together. Promote each other and we will ALL win.