Have you ever heard of Joey Holiday?

If you're a trucker you probably have. He plays "Truckin' Music", and he stays within that. Listening to these songs, you can almost feel the wind in your hair and the pride of being the lion of the highway. It's Country twang, and you can almost hear the shifting of gears, while the songs set the tone for your 8 hours of  getting the job done.

Joey has found a niche that fits him.....If you don't live this lifestyle, they'd see right through you. He has found a market that is constantly out there working, while listening to music. He has a customer base that is fanatic, and growing. The fans of this music LIVE it.....and the musicians they support do too.

This what I mean by differentiating yourself from the rest of the pack. Choose a style that fits you, so that you can be yourself, and never have a need to compromise your values (or lack thereof). But choose a way of presenting that style to focus your energy on people who will appreciate what you do, and support it.

James Taylor and Eric Clapton seem to be the choice for a certain group of listener.
Jimmy Buffet and Kenny Chesney seem to play a style that appeals to people of a certain attitude (or 'latitude', if you will).
Waylon Jennings, Johnny Cash, Jamey Johnson speak for a particular group of people.
If you can recognize how these examples apply, I think you will be on your way to forming a BRAND. By playing it in your style, you will not please everyone......but those that do love you will be fanatic about it.

Find out where your heart is and play there. Most may not like you, but there are a few others who will have a voracious appetite for your presentation....... 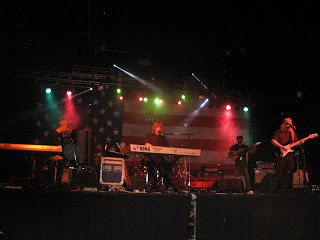 2 keyboards, guitar and drums. An unusual setup to be sure, but the Wayne Minor Band makes full use of this setup to rock the crowd.

The songwriting will remind you of Leon Russell. The execution is flawless and the arrangement is painstakingly tight and purposeful, but doesn't lose that all to elusive feel.You won't spend a moment at a Wayne Minor Band show, wondering who else is playing around town. These guys know how to craft the soundtrack of your night. Check out this live recording done by Mark Foley:
Wayne Minor Band Live at Fountainfest


This is one of the rare bands that other bands seek out to learn from.Don't pass up an opportunity to check them out live.
http://www.wayneminor.com/
Posted by Chris Pope No comments:
Email ThisBlogThis!Share to TwitterShare to FacebookShare to Pinterest
Labels: Corporate entertainment, Middle Ga., music business advice, Songwriter, Southern Rock, Warner Robins, Wedding band

LegenDerry Vs. the Big Hairy Monster 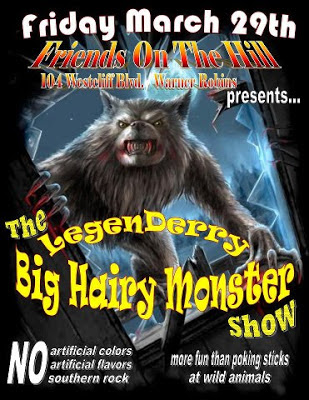 The outrageous frontman for Ran$om has teamed up with the oddball geniuses of Big Hairy Monster to provide Middle Ga. with a much needed kick in the nuts.....(or maybe that was just me).

I want to add more to this article, but I simply can't- If the first sentence doesn't excite you then nothing I say could.

Derry has been a staple a round town for a few years now, and has always put on a great show. The band playing behind him as Ransom, have always been great musicians  able to pull out an obscure cover with no preparation at all. Derry has always taken this quality of the band and highlighted it to the thrill of the crowd. His shows are always fun to watch, as there is rarely a repeat from the gig before.

Big Hairy Monster is band of music afficionados who had gotten tired of the same old music being pandered around town.They started writing originals, and playing covers that lesser bands were afraid to touch. This led to Big Hairy Monster being considered by many to be the "cream on top of the cream of the crop".

Combining these two will undoubtedly be the highlight of the year. I can't wait.

March Forth and September Twenty Seconds 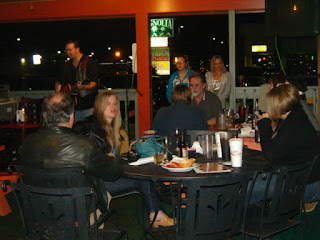 A few years ago I put together a birthday party for my wife...I was of course, booked to play that night. I got the idea that I could make it a birthday party for others born around the same date.
I found people on FB with birthdays within a week of my wife's.
I contacted these people individually, and asked if they wanted to participate.  Several people wanted to but it was Memorial day weekend and they already had plans out of town.  Of the 12 that I asked, 3 were available and agreed to participate. I got each of them an extra large cupcake of their favorite design, and a tshirt. Each person brought their own birthday party to the same location. I ended up with a substantial crowd.....70 people... All but 6 were there for the birthday party. If not for 'my birthday party crowd', the place would have been dead.

Many in this crowd had never seen or heard of me before. I was sure to give out plenty of business cards and copies of my original music. That one event gave me new friends, and fans that have come out to support me ever since. I have gotten to perform at private parties, a Christmas Party, a New Year's Party and office parties because of someone's attendance at this one event.

My birthday is March 4th. It just so happens that March Fourth is the only day of the year that is also a command ("March Forth!" for those of you from Twiggs County). I've also noticed that a few other local musicians have birthdays around that same time, so I'm thinking that it would be a cool idea to have all of us born around late Feb/early March get together and have a big birthday jam.....

Then the good ideas started coming.....

If your Birthday falls between Feb25 through March 11....Let's have a big birthday bash....one night, one big party! Contact me and let me know you want to participate.... we'll get a venue who'll love to have the business....and we'll make it happen.!!! We'll do it next year....I'm thinking the first weekend in March. Contact me at chrisnpope@gmail.com I need to know how many to tell the venue to plan for, and I need to know how big a venue to book.

If your birthday is between Sept 16 and Sept 29 let Uncle Earl Tribble know.......It's far enough out to plan for and we could put together a birthday blowout to pack the house. His email address is prodrummer67@windstream.net    CONTACT HIM EARLY! He needs to know how many people to tell the venue to plan for.

Having everyone's birthdays listed on FB makes it easier to personally invite people we may otherwise not have a reason to engage. If each one of us attending will seek out others to invite to have their birthday parties at the same location, it could open some doors for private parties, office Christmas parties, and increase the attendance at our public gigs. The one event like this that I did, really helped me out alot!

OR finally put 2 and 2 together and turn your next gig into a birthday party for someone you have never met.