Local musician Chris Neal has launched his ad campaign "Alpacas Unite!" The goal of course, is to entertain, and to garner more support for his shows. Following, is the time line of the 'dramedy':


As an alert of an upcoming 'gig' Chris Neal posted-

Kelly can't make it ('cause our Alpaca kicked her in the throat during the milkin') but I've made her some liquified potato salad so she won't starve and the party is ON!

Later that afternoon, Chris' wife Kelly was overrun with calls and emails, asking about her condition and the Dr.s prognosis. Remember, THIS WAS A JOKE!! People were genuinely concerned and Chris' dry sense of humor went right over their heads.

The next day Chris Neal posted the following in response to the overwhelming concern that people had for Kelly's well-being....

OK. Kelly has been approached by several people regarding the alleged Alpaca attack. I want to take this time to make it abundantly clear, that Kelly was NOT in fact attacked by an Alpaca, and No, we do not own any.
I want to apologize for the confusion I have caused and to anyone else who has started fundraising programs; to you we deeply apologize and thank you for your concern.

I WILL be performing at Applebee's on Russell Parkway tomorrow night (8/02) and I DO start at 9 and play until 12. That part was not a vicious lie.
I also want to apologize to any victims of Alpaca violence for trivializing their pain and also to any Alpacas who have been hurt by the untoward accusation of being a violent group. I have friends who are Alpacas so obviously, I am not prejudiced.


It was at this point that Chris Neal seized the opportunity to start a promotional campaign.


As the story goes, some Alpacas were offended by Chris Neal's remarks, believing his apology was insincere, and insulted that the public so readily accepted the notion that an Alpaca could be so violent. In response they issued this press release:


From the Associated Press:
Alpacas for American Acceptance Official Press Release:
We have heard Chris Neal's 'apology' for his baseless accusations...To reiterate: No one affiliated with our organization kicked Chris Neal's wife in the throat. Chris Neal's accusations were horrific and insensitive, and although we are usually non violent, we hope he burns in hell for his lies. This is exactly the sort of thing that causes people to live in fear of Alpacas. His actions were reprehensible, and we would like to further note that "Mr. Neal", or whatever his name is, can have his shirt back. We will no longer be participants in promoting his so-called 'entertainment'. 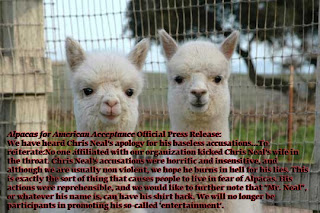 Several popular local musicians have jumped into the conversation/debate/campaign, and have shown support for both sides, namely, Tim Burris (singer for the hugely successful rock band 'FailTrain') who responded with a post:

Do you own an Alpaca? Do you know any Alpacas that have been victims of brutal hate crimes by middle Georgia musicians? If you, or any Alpaca owning friends have seen signs of depression, withdrawal, or evidence of over milking, call the law offices of Burris and Burris today. We specialize in Alpaca civil rights, and noise ordinance disputes. We'll see to it that justice is done.

This message paid for by Alpacas for American acceptance. —


Lance Rodriguez (another well respected local musician) further responded, showing his support for the Alpacas with-

The profiling and slander of Alpacas is a rampant problem in todays society. Please do your part to advocate Alpaca rights. Donate to your local D.A.D (Douchebags for Alpacan Diplomacy) chapter today.


'The Alpacas ( Allen and Alexis)' started a Facebook page, and as their first post, introduced themselves with....

Hi! We are Allen and Alexis Alpaca. We look forward to chatting with you all! We would love to offer you relationship advice, and discuss important topics of the day.

Allen: I drive a light blue smart car and I like Nickye Minaj....She's hot!
My wife and I love karaoke, Nickelback, and Honey boo boo!
Alexis: I've got a thing for Justin Timberlake, but he doesn't even no I'm alive<sigh>

But the one thing we are currently very disappointed with is the Local Music scene in Middle Ga..... ESPECIALLY, Chris Neal. He is the absolute worst. His off hand comments and arrogance have caused the local Alpaca community to struggle with even more prejudice than ever before.

Aside form helping you with your relationship problems, Our number one goal is to put Chris Neal out of business!

Thanks for the friendship!!!
Allen and Alexis


They have further posted comments regarding Chris Neal and his performances....


Caught the "chris neal show' ... He doesn't know ANY john denver.What a tool.


He played a lot of 'popular songs' but I was hoping for some 'deepcuts', I asked for Glen Campbell, he played Glen Danzig.


Hey loser! It's not the same thing!

And 'they' have also posted:


Chris Neal will be 'performing' at Applebee's on Russell Parkway.....It's a really nice restaurant, but if you go...SHOW YOUR SUPPORT FOR ALPACAS!!!! When he finishes a song, don't applaude. Don't give him tips, and request songs like Brown eyed girl, or Sweet Home Alabama.
We don't want to boycott any music venues, we just want Chris Neal, and other musicians like him, to FAIL MISERABLY!!!
This way...they'll replace him with karaoke!
We LOVE karaoke!

It is also a genius move by the 'Alpacas' to make it appear that they have more support than they do in reality. Wait...Reality?.....Oh yes, back to reality....

It's a well crafted, multi-layered ad campaign which is destined to shake the cobwebs off the local music scene, and hopefully, will spark interest in the marketing aspects that many local musicians have neglected.

Really looking forward to watching this unfold.
I hope you are too.