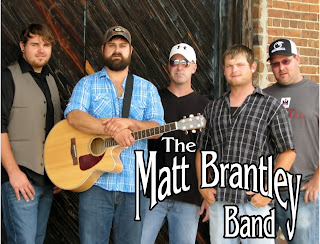 I just heard their debut
WOW! these guys are going to tear it up!
They will be playing Sept 21 in Sandersville.

I have GOT to check this out!!!

From Their Reverbnation Bio:

Matt Brantley is the 2012 second place winner of the Milledgeville Idol. He's bursting onto the Middle GA. music scene playing covers ranging from classic country gold to edgier newer country. But, don't mistake this boy from Ivey GA. for some spit polished, Music Row boxed and packaged deal. You just have to come to one of his shows and check him out. His band is made up of top notch players from his hometown and out of Sandersville GA. Ken Zeke Dixon also from Ivey is one of his two more than capable guitarist, along with Jason Black. Laying down the groove on bass is Chris Lanthrip. And the foundation of the band is Johnny Brewer on the drums. This is a tight group of musicians breathing life back into a suffocating music scene, not to mention they can throw one helluva party. If you're ever out and you see a flyer for this band, take note and go check 'em out. It'll be well worth your time and money!!!